Christmas in 25 Minutes…..I’ve Been to the Mountain Top

“Like anybody, I would like to live a long life. Longevity has its place. But I’m not concerned about that now. I just want to do God’s will, and He’s allowed me to go up to the mountain. And I’ve looked over and I’ve seen the Promised Land. I may not get there with you, but I want you to know tonight, that we as a people will get to the Promised Land. And I’m happy tonight; I’m not worried about anything. I’m not fearing any man. Mine eyes have seen the glory of the coming of the Lord.”

Those words were part of the last speech King would ever make. The next day in Memphis, he was shot and killed at a Memphis hotel. Dr, King was alluding to a passage of scripture found in Deuteronomy. Moses had ascended Mt. Nebo as God showed him all that the Israelites would inherit. The passage reads:

“Then Moses went up from the plains of Moab to Mount Nebo, to the top of Pisgah, which is opposite Jericho. And the Lord showed him all the land, Gilead as far as Dan, all Naphtali, the land of Ephraim and Manasseh, all the land of Judah as far as the western sea, the Negeb, and the Plain, that is, the Valley of Jericho the city of palm trees, as far as Zoar. And the Lord said to him, “This is the land of which I swore to Abraham, to Isaac, and to Jacob, ‘I will give it to your offspring.’ I have let you see it with your eyes, but you shall not go over there.”  (Deuteronomy 34:1-4) 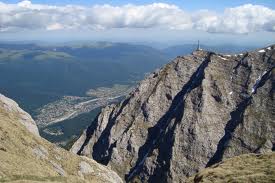 What those words written by Moses and echoed by King speak of, is the promised land of every generation of Abraham. Tonight, we look at our final sound of Christmas that fulfills that promise to Moses and deals directly with a topic near and dear to the heart of King as well. So, join me as we go to the mountain top to tell the world that Jesus is born.

Go Tell it on the Mountain is an African-American spiritual song (also known as Negro Spirituals) that talks about the birth of Christ. Its fame as a favorite Christmas carol is matched only by the likes of such greats as Silent Night and Joy to the World.  For those of you unfamiliar with spirituals and its historical impact on our country, these songs were sung by slaves forced to work the fields of the south in America.  These songs were a part of the lives of these slaves, getting them through the work day. Edgar Winter said, “Music is very spiritual, it has the power to bring people together.”  That is what these spirituals did for the slave. It brought them together. These spirituals gave them hope, peace, and strength.  They were also used by the Underground Railroad. Some famous spirituals like Wade in the Water, Swing Low, Sweet Chariot, and Go Down Moses, served as code songs, giving slaves directions for escape attempts.

Not all spirituals were code songs and many of these songs were based in Christianity.  Even being denied the ability to read and write. slaves found a way to meet, to pray, and to learn about Christ, usually from itinerant preachers. In an effort to preserve these spirituals, an African-American choral director from Tennessee named John Wesley Work, began compiling these spirituals in order to save their historical heritage and traditions. Pretty soon, Works collections garnered the interest of the local African-American college known as Fisk,  Their famous Fisk Jubilee Singers began traveling around performing these spirituals.  Works’ son and brother continued his efforts and they become the first to really bring Go Tell it on the Mountain to the spotlight. This spiritual was different, it wasn’t somber like the rest. It was upbeat and it talked about the birth of Jesus Christ our Savior.  Even in the midst of enforced labor and servitude, slaves still found the blessing they had in their lives and celebrated Jesus when they could.  Work, Jr. and his uncle put new, upbeat music to it and gave it to the Fisk Jubilee Singers to use in their performances. We wouldn’t get the version of the song that we know today, until the early 1900’s when John Work III expanded the lyrics to the version we hear now.

Whether it’s Moses climbing Mt. Nebo, Martin Luther King, Jr., climbing to the top of the civil rights movement, or a slave simply finding the love & blessings of their savior in the most dire of situations, we all need to take a trip to the mountain top and proclaim that the King of Kings and the Lord of Lords is here.  We all need to proclaim from the top of our voices, from the tops of roofs to the tops of the walls that Jesus came, He died, He rose, and He WILL return.  I have been to the mountain top and I have seen the Glory of the coming of the Lord. Go tell it on the mountain, Jesus Christ is born.